The Elder Scrolls 5: Skyrim is an action role-playing game, created by Bethesda Game Studios, originally released all the way back in November of 2011. Players take on the role of a character in a fantasy country called Skyrim, in greater world called Nirn – reminiscent of Tolkien’s Middle-Earth. Following a guided introductory sequence and character creation section, players are largely free to roam the world and can pursue a life of swash-buckling adventure, saving the world from dragons, leading or crushing a rebellion, becoming a master assassin or joining a college of wizardry. Players can even ignore these larger than life pursuits and simply build a house and get rich, functioning as a blacksmith or as a merchant, or even becoming a bard.

There are many different games which have more original stories, with more enjoyable combat or with deeper, more meaningful narrative choices for the player to make. But, in my opinion, no one game has married together all the various elements required in  successfully creating a fantasy realm for players to freely live a ‘second life’ in, in a way that’s as easy to slip into than Skyrim has. Because of the vast encompassing breadth of the world, the great well of lore and the gameplay’s reactive immediacy, I’m fairly confident that it’s my favourite role playing game of all time.

I’ve recently been replaying the game’s PS4 re-release and felt like discussing the UI/UX. The re-release features all the DLC packs included along with a graphical overhaul and curated mod support, really breathing some new life into the game.

The UI/UX of Skyrim is controversial, and as I’ve recently been playing the PS4 re-release, I decided now was a great time examine and discuss what I think works and what does not. Skyrim is typically accused of being style over substance, which may have been aimed at drawing in a wider audience of players (who might not be hardcore RPG enthusiasts) and favouring the console market, while simultaneously alienating the PC audience.

I am and have been an exclusively console player of the game, so I will not refer to the UI/UX from a PC player’s perspective n this article. Regardless, there is much to discuss.

No mini-map (big discussion on this vs Skyrim’s). No highlights unless within arm’s reach. Ability to walk around for most dialogue, usually a cutscene or face-face forced chat in other games. The O button opens direction pad choice of map/armour etc is annoying, explain why. Map edges of screen are annoying, discuss the 3d map trend here too. Status effects are completely un-remembered. Shouts and magic etc are too far from combat to bother experimenting. Cant see character, cant see what you’re wearing. Optimised for console but not actually useful.Don’t forget how baffling the roundabout of constellations was at first, still don’t quite get why you can upgrade more than once on some and when.

Before I tackle the main HUD, there is a noteworthy point regarding loading screens here. When a new player turns on Skyrim, passes the logos etc, lands on the main menu screen and presses ‘New Game’, the are immediately sent into their first loading screen.

Loading screens are necessary of course, but all efforts must be made to make them as tedium-free as possible. Skyrim employs some effective strategies to achieve this. Players see a highly detailed model of an impressive looking dragon, with a flavour-text quote from a mythical song. Players can rotate and zoom in/out of the model. Later, these models and flavour-text are a bit more randomised, sometimes relating to the area the player is currently located in or their currently active mission, for example. Finally the ambient music of the game continues seamlessly over these loading screens. These choices really reduce the nuisance of the loading screens, especially as they were excessively long on the game’s original PS3 release.

Once players have taken control of their avatar in the introductory sequence, we can see the main HUD in action.

When outside of combat, the only onscreen HUD is a compass, at the upper centre of the screen. This compass highlights areas of interest, such as a nearby crypt or town. The icons to these locations have a great feature, which is that locations which are not yet discovered are black with white outline, and the reverse for already located locations. A second feature of these is that the closer the player gets to the locale, the more opaque they become on the compass, until the player reaches/discovers the locale, which is cued by a drumroll and the name of the location appearing in the centre of the screen. The font for the non-diagetic UI (so not including in-game books for example) is Futura Condensed, a tall, bold sans-serif font which priorities legibility over theme. There are no highlights unless and item to pickup or interact with is within arm’s reach or so of the avatar. There is also no ‘vision mode’ like in Arkham Asylum, and which I mentioned in my God of War discussion, so interactive elements in the environment (like catchable bugs, harvestable plants etc) have no highlights unless within arm’s reach of the avatar and are being directly looked at. I appreciate this, as it means the player can just enjoy the beautiful game world.

This method of keeping the compass thin and keeping other HUD elements invisible when not in use reduces the intrusiveness of the UI and hands over more screen real estate to the beautiful game-world better than a mini-map. I also consider mini-maps to be subtly insinuate a sci-fi feeling, which would subvert Skyrim. It seems clear that minimalism was important for the dev team and that removing all obstacles from player immersion was critical. An admirable goal,  but when we move to combat and in particular, the menu system, we’ll see this didn’t always pan out well.

Enemies appear on the compass as red blips (considering the lush foliage of Skyrim which can obstruct vision, this is very helpful). When combat actually commences (a strike lands), 3 new bars appear in a row, at the bottom of the screen, magic, health and stamina in blue, red and green, respectively. Stamina only appears when sprinting (including outside of combat) or swinging a physical weapon, and magic will only appear if the player is using magic (again, including outside of combat). This colour-coding is clear and the system feels smooth. Enemy health is visible directly under the compass along with their name. There is no enemy ‘lock-on’, which I prefer, as I find these systems often tedious to cycle through and the enemy health and name updates simply depending on who the player’s reticule is on.

I really love the combat in Skyrim, especially at the time it came out. In the intervening years we’ve seen great examples of more heavy, weighty combat and Skyrim definitely suffers from being a bit ‘floaty’ and ‘slidey’ as players slip around swinging wildly, but the fact that you have the immediacy of having to raise your shield and swing your sword yourself, using the left and right triggers, sells the fantasy of being this warrior more than an older style isometric RPG in which you select an attack type from a list and click on the enemy for the avatar to perform the attack on. Coupled with the minimalist UI, which only appears when needed and you have an experience which removes so many obstacles to immersion that I often encounter.

Where The Trouble Really Starts

The major problems begin when players need to interact with the menu system.

Recently I fought a frost troll, I wanted to switch weapons in combat and found that I had to enter the ‘Level up/Map/Magic/Items’ menu, select ‘Items’ with 2 right pushes of the analogue stick (a cumbersome feeling) then scroll down to the weapons tab from the tab I had opened previously and then select the weapon I wanted to use. A linear list view also means that you tend to do a lot of scrolling, and the tabbed interface hides everything from you. This is too much navigation, imagine how difficult this must be for a newer player who’s still getting to grips with the layout.

Granted, there is a much welcome ‘favourites’ list. Pressing ‘triangle’ will add the weapon to a list which can be cycled through directly from the play screen using the ‘up’ & ‘down’ buttons. This can be easily forgotten or overlooked however, and especially if players want to use new items or an item they infrequently need. With the rate players are picking up or switching out items, this system is clunky and really stops the flow of combat dead in its tracks. An approach I prefer is an ‘item-wheel’ which slows down time dramatically when open, Days Gone uses this to good effect, with some tweaks it could serve better here.

At another point in the game, I’ve become tired of hearing the NPC’s I meet tell me how unwell I look. What’s really happening is that I’ve contracted some kind of illness or poisoning, which is negatively affecting my strength, endurance or something like that. The problem is, this is never explicitly communicated to the player (via a symbol above the player avatar, some kind of symbol on the player’s health display etc) and the player must figure out that they need to enter the ‘Level up/Map/Magic/Items’ menu, select ‘Magic’ with 2 left pushes of the analogue stick and then scroll to the bottom of that list to ‘Active Effects’ to see what ailments and powers they’re currently suffering and benefitting from. It can be fine to hide things like character stats behind tabs, but hiding key information like what is slowly killing you or permanently reducing your carrying abilities is unacceptable.

Standard RPG convention is that, when a player opens the inventory, they see their avatar, wearing the selected armours and clothings and wielding whichever weapons are selected. Skyrim strays from this, to its detriment, as this allows players to see what they have equipped at a glance (with enchantments etc signified with shaders) and to compare weapons/ armour stats of what they have equipped vs what they’ve newly acquired (often signified with red & green fonts for rapid digestion) and make more informed choices, with less time spent analysing. This also allows players to view their avatar’s appearance in the game world, which is so important for role-playing, for immersion. Skyrim is popularly played in the first person, making this so much more important! 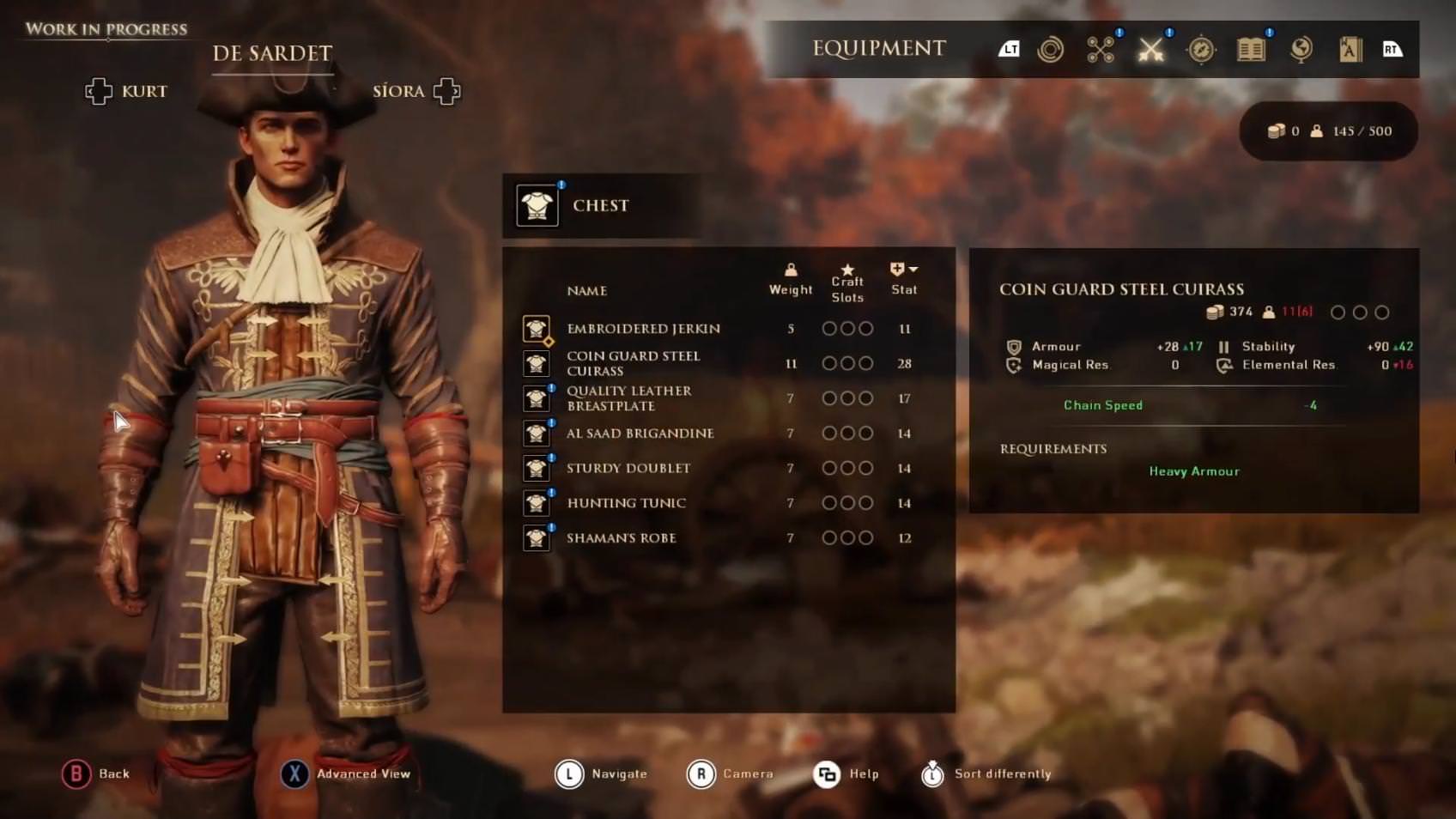 These are a few examples where Bethesda’s commitment to maintaining a minimalist UI experience is actually detrimental. The lack of clearly indicated information, and key information buried in sub-menus perplexes the player and keeps them in the dark as to what’s going on or what they are actually capable of in-game.

I’ve enjoyed going back and exploring an older release’s UI/UX and I hope my thought’s will be of some use to you.